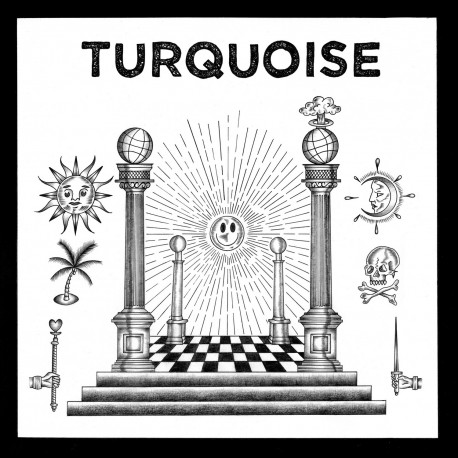 "The idea of Turquoise was born in Paris in late 2018. At that time, guitar virtuoso Romain had just come back to the French capital after living in London for 5 years where he got to play in post punk band High Vis and before that in Dublin where he was part of the furious scandicore unit Rats Blood along with members from Grit, Contort, Burnchurch or Putrefaction among others. Upon his return, he offered four-string master veteran Jean-Phi, former bass player of local Swedish-loving hardcore punk unit Krigskade (who had split up 3 years prior) and current guitar player of anarchopunk band Barren? and punk act Going Away Party, to form a hard-hitting raw rocking käng band in the vein of Totalitär/Infernöh/Heratys with him. They managed to convince Thomas to get out of retirement and take care of the crucial drum duties and a second Romain - bass player for the aforementioned Barren? and d-beat thrash band Ansiax - was blackmailed into joining the band on vocals. It was collectively decided that the lyrics would be in French, since none of them could actually speak Swedish, and would tackle vanity, blindness and selfishness that define postmodern lifestyles while the name Turquoise was chosen in order to challenge hardcore's lexical orthodoxy. Some gigs were undertaken both in Paris as well as other French cities and the band wisely decided to record eight songs just before the (first) lockdown at Brest's At The Movies Studio run by Jackie who already had some neat recordings under his belt from the likes of Syndrome 81, Litovsk or Kronstadt. Those eight songs were then mastered by Jonas Blakklodge in the summer and make up Turquoise's first record, a mini-album entitled "Hantise", that has just been released on the ever-reliable noise and tune merchants Symphony of Destruction from Brittany and young promising Parisian label Les Choeurs de l'Ennui."