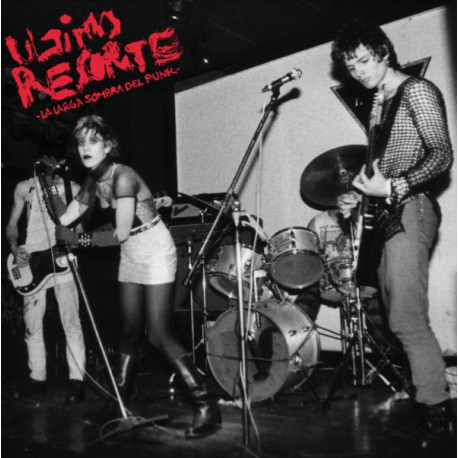 ULTIMO RESORTE were the bridge between the very first Spanish Punk Generation and the first Spanish Hardcore Wave. During their 5 years of existence (1979-1984) they only managed to record a demo, and two impossible to find records. A self-titled 7 track 7″ EP and “Una Causa Sin Fondo” a 5 track 12″. “La Larga Sombra Del Punk” compiles both those records plus a 16 pages 11″x11″ booklet with a long interview with the band and tons of pictures and fanzine clippings.. Musically they lay in between the most aggressive parts of VICE SQUAD, DISCHARGE, ELECTRIC DEADS or even SIOUXSIE AND THE BANSHEES. Fronted by Silvia Resorte her voice became their trademark always backed by an urgent band trying to figure out what hardcore was about and a synth player that created a cold atmosphere over most of their songs. This seminal band hailed from Barcelona and you can tell with the desperate feeling their songs have. Their lyrics have that teenage angst feel that only bands from the early 80’s managed to write. Together with RIP, KANGRENA, ANTI-DOGMATIKSS, VULPESS, DESECHABLES or LARSEN this band helped putting Spain in the international punk map back in the day.