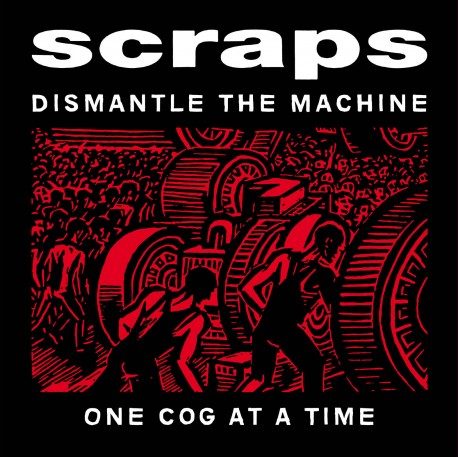 SCRAPS - Dismantle the machine one cog at a time LP

With the rerelease of this 1994 full length, we are starting a series of reissues of recordings from the legendary French band SCRAPS. The band was formed in 1983 in Lille, and from the very beginning was a counterweight to traditional punk sounds dominating the local scene. Their hallmarks were aggressive tempos with a ruthless political message. In addition to such bands as HEIMAT-LOS, KROMOZOM 4, FINAL BLAST or RAPT, Scraps were one of hardcore precursors in their own country. Thanks to tours, the exchange of cassettes and records, and interviews in fanzines, Scraps quickly gained international fame in DIY circles. The album "Dismantle the machine one cog at a time" was originally released by X-Mist Records in Germany, and was their last studio release. It was recorded after the departure of David, the band's singer, from his other band - NATIONS ON FIRE. The material for this record was created during the formation of ‘United Europe’ and expressed concern about the formation of a cross-border European corporate bank led by banks and investors in which radical movements are weakened or destroyed, and the police make brutal evictions of autonomous spaces. After 25 years since the original release of this LP it’s available again and this time features a completely new graphic layout and new mastering (by Smok, Studio As One)