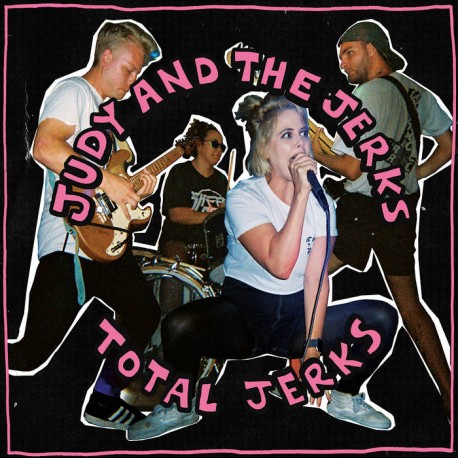 Step by step, from contributing to their local hub city scene (Hattiesburg, Mississippi), to shows and tours all over North America, and to numerous tape and vinyl releases via Thrilling Living Records, Neck Chop, and bassist Hampton's own Earth Girl Tapes, JUDY AND THE JERKS have been making a name for themselves in the US DIY punk circuit for the past 5 years. Now they are ready to rock the world with an upcoming European tour and this compilation LP release to back it up. This piece of vinyl collects five complete demos/tapes and two tracks from “Alive at the Skatepark” live-tape - all of them were originally released by their own Earth Girl Tapes between 2017-2021. This ultra-fun set of 27 tracks includes some rad cover songs proving how this band is not afraid to have open minds and open ears - from Agent Orange, Go-Go’s and Buzzcocks, to Die Kreuzen and Negative Approach, Gorilla Biscuits and Floorpunch, and even not-so-old bands like Civic Progress und Urban Blight. How cool is that?! Still their sound is characterized mostly by early 80’s Cali hardcore (think Circle Jerks, Red Cross or matched with Sin 34) with the late 70’s LA/OC punk touch but with their own character, thought, and twist. No posturing, no pretentiousness, just pure and honest hardcore with a big joyful smile on their faces. This is such a fun band for such unfun times. “Total Jerks” LP is coming out with an additional booklet with the lyrics, flyers, pictures, and liner notes by friend of the band, Jesse Moore. Mastered by Smok (Post Regiment, Falarek, PESD, Yestem) at Studio As One