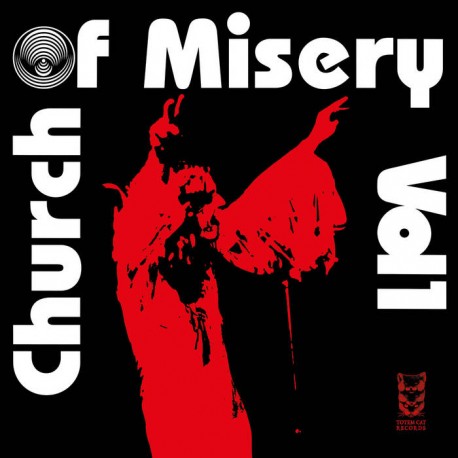 Repress of the debut album from Church Of Misery! Glorious, groovy stoner doom from the Japanese masters of heaviness. 'Vol. 1' is indeed very much Church of Misery-esque. It's definitely doom metal with a hint of fuzzy stoner elements; the very same ingredients used in the band's music today. Bassist Tatsu Mikami is and has always been the only constant member of the band, so the sound varies from album to album. 'Vol. 1' doesn't feature either of the more established vocalists (Yoshiaki Negishi and Hideki Fukasawa), but a guy called Kazuhiro Azaeda. This is perhaps the most notable difference between 'Vol. 1 Church of Misery' and 'Master of Brutality and The Second Coming Church of Misery'. Azaeda doesn't have the whisky-soaked vocals of Negishi nor the sharp shrieks and growls of Fukasawa; both who fit the band's music better than Azaeda's vocals. He sounds a bit more like a very enthusiastic drunkard at a karaoke bar. Not terrible, but far from convincing.