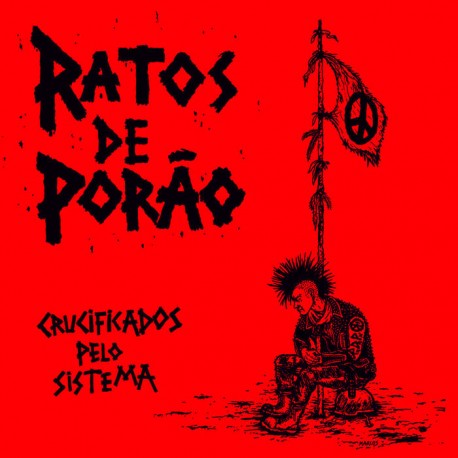 Ratos De Porão's Crucificados Pelo Sistema (1984) contains all the fury, the frustration, the rage and the pain of four young ones against the system in a country that was in the midst of a change from Third World to trying to fitting into a new social order. The projected image of Brazil with its beautiful mulatas, exotic beaches and tropical fruit drinks filled them with disgust, living there in one of the most dangerous cities in Latin America. Their reality was brutal and they wanted to scream it at the entire world. Sixteen songs were formed on the same base as what would later be called "D-beat." The Finnish bands from the '80s were really important in the Brazilian punk scene, just as Discharge was. Simple, fast and straight to the point. Two classic songs have been added for this special occasion, recorded for the classic Ataque Sonoro compilation (which also contains Brazilian pioneers such as Virus 27, Colera, Armagedom or Lobotomia, amongst others). 180 gram vinyl. Housed in a gatefold with pics and musings by Gordo. Reissued by Beat Generation.