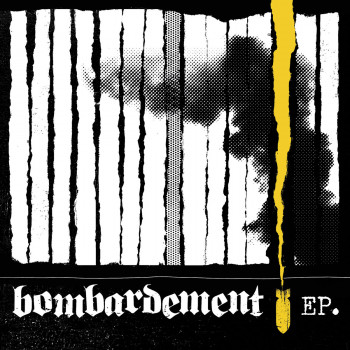 Artwork by Luc
Photo by Jesse

(RAZORCAKE) This EP shows that last year’s 12” was no fluke as the French quintet continues with a d-beat approach that is tight as hell and suitably powerful. There is a slight change on “My Own Satan” which has a more heavy rock feel to it, but it doesn’t lose any of its brawn for slowing down the pace a bit. The best single I’ve heard this year. –Rich Cocksedge

(SORRY STATE) I liked the debut 12” from France’s Bombardement that came out last year, but for this latest 7” they’ve changed singers and delivered something even more unique and crushing. The core of their sound, however, carries over from the earlier material. As before, there’s a pronounced Discharge influence, but Bombardement pulls more from the Hear Nothing See Nothing Say Nothing era than Discharge’s more stripped-down earlier material, incorporating metallic elements like fast palm muting and blistering lead guitar and building a heavy, layered sound. Bombardement’s fast rippers stand right next to cream of the crop current bands like Subversive Rite, and the catchy but non-obvious guitar leads are often thrilling. However, my favorite track here is the mid-paced “My Own Satan,” whose main riff has an early Motley Crue / Rant sensibility that makes the track sound unique. This one is a certified ripper.

(NO ECHO) My newest lockdown obsession is Bombardement. The Bordeaux based hardcore punk band just dropped an essential 7” through a triumvirate of labels to watch. Kick Rock Records, Symphony of Destruction, and Destructure all had a hand in seeing the band’s eponymous EP committed to wax.
I’ve done my homework retroactively and, digging backwards through their discography, they arrived with their fingers on the nuclear codes, a fully realized proposition. Boasting a rad 2016 demo and a sterling 2019 long player, D-beat and raw hardcore fans would be wise to take notes.
Having covered the mighty but underrated Swedish D-beat crew Meanwhile on their aforementioned first recording, Bombardement’s starting point has similar coordinates. They also excel at no frills crusty hardcore and keep the proceedings appropriately short.
Brutal brevity aside, I hear bits of influence from the more punk-leaning Imperial Leather to the straightforward rabid fury of Totalitär, yet they manage a unique and defining quality all their own. Scattered throughout the songs are squealing guitar lines that fall somewhere closer to Holy Terror hardcore.
Opener “Blood. Cash. Self-Destruction” is a dexterous blend of thrash leads and rampaging D-beat, sounding as apocalyptic as the bombs gracing the cover. Pairing a sharp and treble-heavy raw hardcore bent with an intimidating low end rhythm section, Bombardement’s biggest asset is that they seem to come from the school of minimalism, lyrics-wise.
Spitting out venomous couplets with a shouty cadence a la Discharge or even Anti-Cimex, the desperate repetition feels urgent and chaotic. Inasmuch as the sound pays homage to the halcyon days of crust punk, the band doesn’t pay much mind to genre confines. Midway through there’s a ripping guitar solo that feels far more pained or tortured than it does flashing its chops.
The fires are at last unleashed on the following track “Summoning Flames.” Starting in much the same exhilarating fashion, the guitars arrive as if in mid-solo. Their off the rails approach is typified by my favorite moment on the EP.
As the minute mark is ushered in, there’s an isolated and quick-picked bass riff that feels utterly devastating. As if awaiting the shells of munitions to shower down upon the listener, it feels like the floor is giving way. Alongside a blazingly fast drummer, it feels like they’re racing to the song’s end only to smash willingly into a wall.
Surprise of the release certainly goes to “My Own Satan.” The opening salvo of the third track starts off with, date I say, swagger? In a style not employed elsewhere, Bombardement clearly excel just as well playing Motörhead’s mid-paced groove, giving leg up on the monitor vibes.
It feels a bit like “City Weapons” era Inepsy, if they’d grown up on the twin leads of Thin Lizzy. The vocals are the true MVP on this ripper, feeling as desperate as ever but given a bit of space to breathe and enunciate. This more stripped back variation on their D-beat, raw hardcore is killer.
“Abyssal Grave” though? This is a crusher that gladly ushers in more “four on the floor” galloping D-beat with aggressively relentless drumming which is perhaps the foundational key to a good crust band. Just prior to the 1:30 mark, there’s what appears to be a slowdown moment.
There’s a perfect vocal break pulling what almost feels like a mosh call. Instead, the false moment of reprieve is decimated with a reckless doubling down of speed. Beneath it all is a piercing pastiche of feedback and distortion that ultimately pushes us out the door.

(Last Rites, In Crust We Trust Vol.18) The new 4-song EP. from Bordeaux band Bombardement follows the same fleet-footed and skull-hammering trajectory as their 2019 self-titled LP. The band dispense earth-quaking d-beat and wall-shaking hardcore backed by new vocalist Oriane’s dynamic howls. Ridiculously catchy tracks like “Blood. Cash. Self-Destruction,” “Abyssal Grave,” and “Summoning Flames” are cut with sky-rocketing solos—and they hit like a runaway truck—while the rollicking “My Own Satan” features a punchy pub-rock vibe that calls to mind the best work of Amyl and the Sniffers.
Bombardement’s stampeding new EP is a whale of a time from its first seconds to its last. The band sound even more lively and inspired than they did on their fired-up LP, and Bombardement’s new tracks exude all the throttling riffs, breakneck drums, and scorching vocals you could ever desire. Even better, Bombardement sound like they’re having a total blast here, and the sweet Dark Lord knows we need all the high-speed and high-spirited punk we can get right now. More, please! ASAP!

(Thoughts Words Action) Bombardement is a highly energetic female-fronted d-beat quintet hailing from Bordeaux, France. It’s been a while since we covered their debut full-length record on our pages, but the band is back with another mindblowing recording. To serve as a reminder, Bombardement also has a decent demo recording, published after their formation in 2016. Considering their engagement in recording fierce d-beat music, it seems that the band members tend to retain prolific as much as possible without losing any quality. This time, Bombardement offers four brand new compositions that give all the props to their previous debut vinyl record.
The extended play commences with Blood, Cash, Self-Destruction, straightforward d-beat number that resembles the sound of the greats among this specific genre. The guitars provide an intense approach through switchable guitar maneuvers, supported by slightly distorted basslines. The fierce female leading vocals marvelously layer these orchestrations with delicate shoutouts. Each instrumentation remains relentlessly aggressive, mainly because of the rapid drumming acrobatics. This composition surrenders the recognizable sound of the Bombardment, which, by any means, demonstrates the ultimate power of d-beat. Summoning Flames comes up next with the energetic drum fills and blasting solos. The group follows the same aesthetics and keep things at the same pace, but it seems this particular number liberates more dynamics than the previous one. Whatever is the case, Bombardement keeps things interesting by stacking layers of distortion, which are followed by crispy sounding cymbals. The maniacal splashing cymbal sounds emit the cacophonic ambiance that pairs to the compact sound of the entire band. However, both elements are perfectly blended all together.
Then My Own Satan kicks in with more moderate, heavy metal influenced sound. Perhaps this tune leans towards Massacre Divine or Shooting Up The World styled d-beat sound, based upon crossover thrash riffages, and heavy metal shouts, but still, it’s a pretty damn good composition that fits the aesthetics. Besides some standard Discharge-oriented accentuations, Bombardement brings up some Sacrilege vibe to the table. Whatever is the case, the group shreds up the hellish ambiance with much calmer, but still, crushing song. Abyssal Grave closes up this magnificent recording by bringing back the colossal dynamics so characteristic for this genre. This composition appears as a repetitious slap in the face, mainly because of the rhythmical lunacies that chop the guitar works in half. The second guitar saturates the overall sound with a chaotic microphony that comes after the intense solo. The initial riffages are remaining intact during these experimentations, and everything seems to fit perfectly in the mix.
The entire recording sounds completely mindblowing from start to finish, and Bombardement once again proved they’re one of the best protagonists of the contemporary d-beat scene. This material will suit the admirers of Discharge, Disclose, Sacrilege, Bastard Sons Of Bukovski, Deathreat, Dean Dirg, and other similar groups who kept their sound uncompromising, honest, and raw.