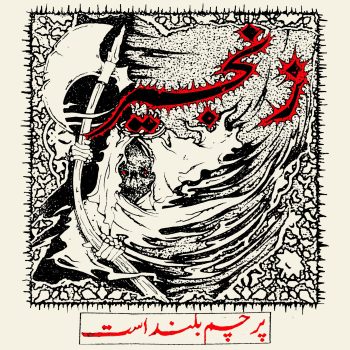 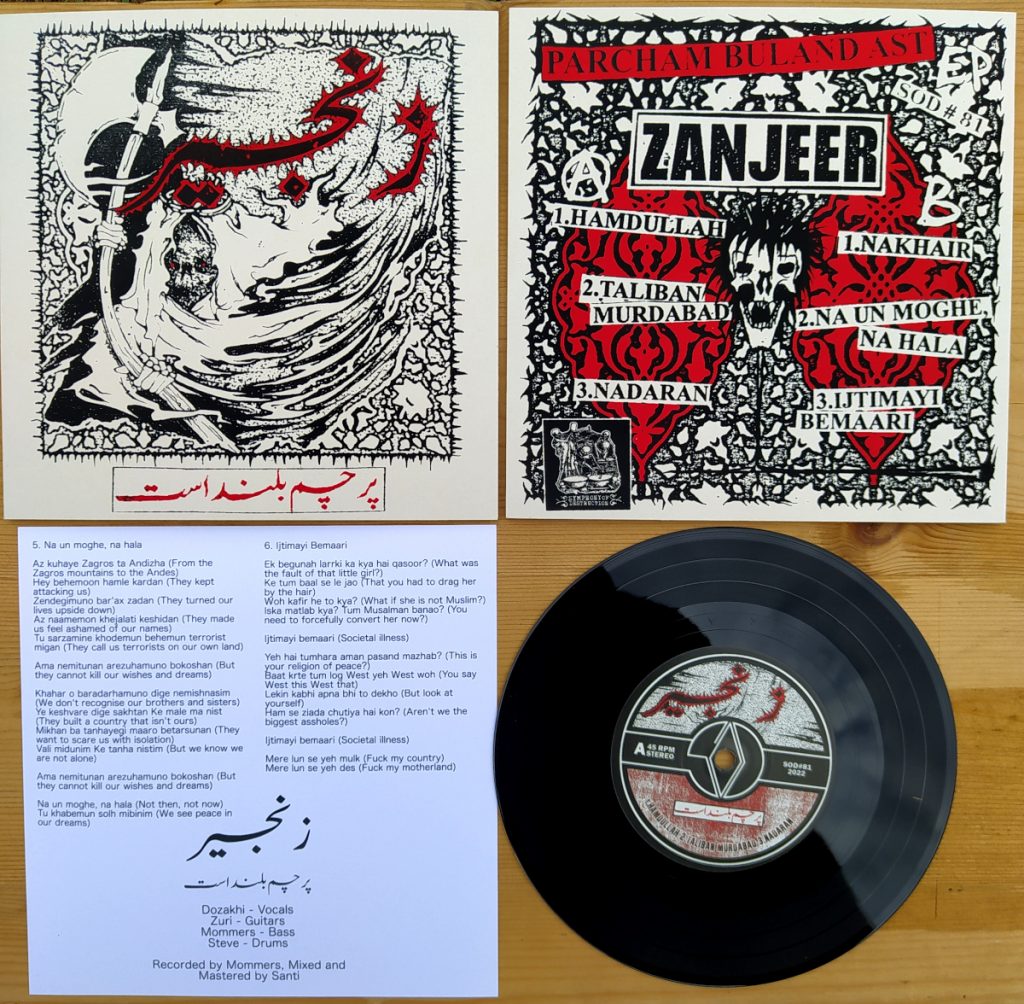 (THE QUIETUS) Zanjeer’s debut release, a six-song 7-inch on Breton label Symphony Of Destruction titled Parcham Buland Ast, is one of the year’s more interesting hardcore punk releases. Now, the music isn’t the ‘interesting’ part, by which I mean it’s really good: snarling crust rammage with metal hints and Japanese noisepunk genuflections, fresh flesh for fans of (say) Framtid or Extended Hell and all but one cut under 90 seconds.
More atypically, Zanjeer’s members come from Pakistan, Colombia, the UK and Germany, the latter their current location. You might know guitarist Zuri from his time in Bogota’s Muro, drummer Steve Lucas from Nottingham heavyheads Beast As God – or frontman Hassan Dozakhi from Pakistan’s punk and rap underground, which would arguably make you more qualified than me to write this review. I did though find out, wholly by chance, that on Parcham…’s opening song ‘Hamdullah’, Dozakhi references a couple of bars from his MC gig in hip-hop trio Daranti Group. Pretty cool, but you’d hardly know it’s the same dude here, blowing his top with some Urdu-language invective that properly goes for it. ‘Taliban Murdabad’ translates as ‘death to the Taliban’, so you get the idea there; ‘Ijtimayi Bemaari’ concludes “Fuck my country / fuck my motherland” after targeting theocratic bullies and Islamic zealots blaming the West to distract from their own failings.

(Sorry state) Symphony of Destruction brings us the debut record from Zanjeer, a band based in Bremen, Germany, but featuring members from Colombia, Pakistan, England, and Germany singing lyrics in Urdu, Punjabi and Farsi. There’s been a lot of (long overdue) interest in the punk scene in hearing from marginalized voices, and Zanjeer seeks to provide, as the label’s description notes, “a necessary window into the lives of people from the global south.” I’ll let you read the lyrics yourself so you can hear what the band has to say about that rather than this white person’s summary, so I’ll keep my focus on the music, which rips! Zanjeer’s sound is pure hardcore without sounding like it’s too grounded in any specific sound… as with the members’ backgrounds, there’s a melting pot approach. “Nakhair” is built around a crushing mid-paced part that wouldn’t be out of place on a Warthog record, but moments like the off-time punches in “Ijtimayi Bemaari” or the lunging beat in “Na Un Moghe, Na Hala” sound unique and distinctive to me. It’s tough to make a record in this day and age that sounds fresh without compromising on the intensity and rippingness, but Zanjeer has done it. And its eye-catching screen printed packaging ensures you’ll want to pull it out and play it every time you flip past it.

(Only Death is Real) Cramming six tracks onto a 7″ release is no mean feat. Sure, there are rabid grindcore bands who’ve fit ten times more songs on a 7″, but even so: six tracks means these guys aren’t beating around the bush. They say what they want to say, and don’t dawdle about. Zanjeer is a truly international group. Members come from Germany, where the band apparently have their headquarters, Colombia, Pakistan and England. Three continents, the same sentiment of rage.
Let’s take our cues from the band, and not beat around the bush. Hardcore with a crust tint is what Zanjeer are about. The short ‘n’ sweet songs focus on violently pounding drums, aggressive riffs and coarse, shouted vocals. One name to drop pops into my mind instantly: Doom. These guys land square in that same no-man’s-ground of nascent crust, extreme hardcore and metallic elements.
The six songs, clocking in at a total of nine minutes, are all cut from the same cloth. But that’s okay. Zanjeer plow through their songs with convincing fervor and violence. Ranging between mid-tempo and speedier hardcore chug-chug, with a focus on the latter, there’s certainly not a lot of time to catch breath here.
Original? No. Good? Yes. That’s the simple bottom line boiled down to two simple facts. That should suffice for you, if aulde style crust-hardcore is your thing.
I wouldn’t mind hearing more from these guys in a longer format. I feel these guys have the necessary oomph in sound, attitude and approach to succesfully carry the rage for a full album.

(The Sleeping Shaman)Zanjeer (Chain) from Bremen, Germany’s debut EP Parcham Buland Ast (The Flag is Raised) caught my attention for a couple of reasons. First of which is the artwork by Nicky Rat who also designed covers for the likes of Extinguish (who I reviewed for The Shaman) as well as Power Trip and which has an evidently Anti-Cimex, crust punk and heavy DIY vibe, this should give you an idea as to the type of music you can expect to hear.

The second thing that drew me to the band is the multi-lingual nature of the lyrics with Urdu, Punjabi and Farsi (languages native to Pakistan, India and Iran respectively). The band are comprised of Dozakhi  (vocals), Zuri (guitars), Mommers (bass) and Steve (drums) and they hail from all over the globe including Pakistan, Columbia, England and Germany. The members feature in quite a number of other bands including Multinational Corporations, Beast As God, Amenazas and Dead Bhuttos. Furthermore, apologies need to be extended in advance for any inaccuracies in my translations of the track titles.

Hamdullah (Thanks To God) kicks things off and what is immediately apparent is the vocal style that reminds one of Max Cavalera during his tenure in Sepultura. This is backed up with ripping hardcore and crust punk that recalls vintage Disrupt and Discharge, making for a truly explosive start to the EP.

It is pretty obvious as to what the theme behind Taliban Murdabad (Death To Taliban) is, especially with the unfortunate re-emergence of that regime in places like Pakistan and Afghanistan in recent years. Lyrics such as ‘You claim you’re a Muslim? I say you’re a terrorist’ leaves you in no doubt that this is a band that sing from the heart and who don’t pull any punches when it comes to expressing themselves. Musically if Brazilian legends Ratos de Porão ticks your boxes then you’re in luck, musically a lot more in common with the crossover/metal vibe of that band than opener Hamdullah.

Nadaran (They Don’t Have) according to a recent video interview with Trendcrusher, is about the sense of not fitting in, either with your own people or those of your adopted homeland. Musically there are hardcore influences present with shades of SSD as well as Chaos UK, although so fierce is the music that it leaves both of those bands in the dust. Nakhair (No) is the longest on the EP at just over two minutes and positively progressive when compared to the previous tracks, starting off slowly with an increase in speed from a steady thrash beat before erupting into familiar hardcore territory.

Na Un Moghe, Na Hala (Not Then, Not Now) took me a little by surprise with some nods to death metal, especially in the vocal department. It’s not full blown John Tardy but a somewhat close approximation in places, while the music feels like its attempting to summon the bowels of hell ala bands such as Abscess. Lyrically however it is a different proposition and a far cry from the horror, satan and torture obsessions of that genre and is instead a tip of the hat to all independence movements around the world.

Finally, Ijtimayi Bemaari (Societal Illness) is a lambasting of forced religious conversions, once again tapping into Ratos de Porão’s sound (never a bad thing) and would easily belong on the Brasil and/or Anarkophobia albums, especially with the killer bassline. Not a bad way to conclude proceedings.

If the struggles for social justice and freedom from oppression needed a soundtrack, this eight-minute blast of musical fury is definitely it. Immense.