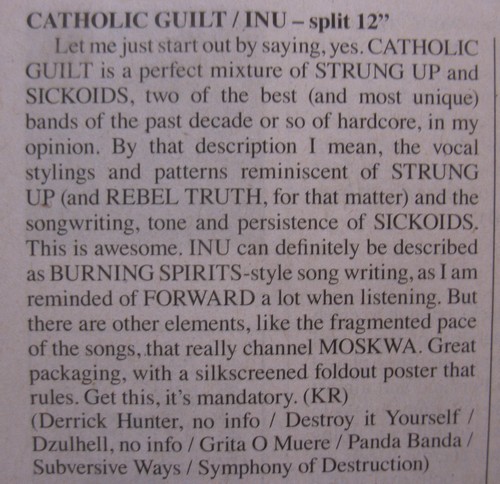 This is an all European hardcore split LP and both bands are absolutely worth to check out. Inu from Spain serve five blasts of intense no bullshit hardcore, carrying on the flame of classic Japanese « burning spirits » bands. They fuse the power and intensity of hardcorepunk with flashy guitar solos and speed-metal influences. It sounds like these guys probably have listened to a lot to Bastard, Death Side, Crude, Burial and Selfish. The songs are made with catchy choruses and they are delivered with pure intensity. On their vinyl debut Catholic Guilt from Austria sound like something, that could have been taken from the « Network Of Friends » compilation. Things are based on a really unique chorused guitar sound, d-beat influenced drums and an overall dark atmosphere comparable with Die Kreuzen and The Necros. The product of these influences somehow captures the sound of mid and late 80s European hardcore, which means Catholic Guilt fuckin’ rule. You get six brilliant songs, of which one is already known from their demo tape.

Two killer European bands come together to release an insane all go, no stop split LP armed with D-beats, sick solos, and some piercing guitar tones.

Catholic Guilt, from Austria, plays a good mix of fast paced 80’s hardcore punk with some slower tunes that keep the audience slamming. This side of the split reminds me a lot of A Global Threat and Amdi Petersens Arme. This is the bands first vinyl release, but it looks like they have a 7″ called Futile Attempts on the way which I’ll definitely keep an eye out for.

Inu, from Spain, has a more punk/d-beat style that comes chock full of pogo-your-heart-out parts and group chants. When I listened to the song Cobardes for the first time all I could think about was Peligro Social. The band also seems to have a heavy Japanese influence, like at practice they just sat around and thought about becoming the next Gauze. I’m down with that.
SORRY STATE Review:
Split 12″ from these two European bands. Inu are from Spain and play burly, Japanese-style burning spirits guitar with a distinctly Spanish flavor. The riffs are big and meaty like Death Side and there are some Maiden-esque leads, but the unique lilt of the Spanish language means it can’t help bud recall old Spanish stuff as well. As for Catholic Guilt, they’re from Austria and play dense, discordant hardcore in the Die Kreuzen tradition. When the label told me about this release they actually mentioned Sickoids, and with the Die Kreuzen-esque riffs and chorus-ed guitar this really does sound quite a lot like Sickoids, perhaps mixed with some Polish hardcore like Dezerter. A band well-worth checking out if you ask me. This is also housed in a really swank-looking 2-color silk-screened jacket.